How global quarantine has changed the behavioral habits of buyers, what trends have appeared in sales and how brands respond to a pandemic, we will talk about all this in the article.

Who wins? E-commerce and cloud services

Pandemics drive innovation and accelerate market change. In the early 2000s, SARS gave a powerful impetus to e-commerce in China, and today's crisis is rapidly expanding the functionality of online services.

In addition to the naturally growing demand for ordering products through Amazon, Uber Eats and Instacart, a new trend has appeared on the market - contactless delivery. It was launched by the Chinese service Meituan Dianping. The essence of the service is simple: couriers leave the order in the agreed place and inform the customer that it can be picked up.

At the height of the epidemic in China, a card was put in the bag with information about the temperature of the people who prepared and delivered the food, as well as about the disinfection. In January-February, more than 80% of Meituan Dianping customers used this delivery. Following the Chinese company, the innovation was introduced by American brands - KFC, Pizza Hut, Postmates and Instacart.

“Buyers can become more impulsive when they are reminded of mortality,” says Kate Nightingale, founder of Style Psychology.

Consumption in online stores has really grown significantly - this applies not only to vital things, but also to household goods that provide comfortable isolation during the quarantine.

So, the Chinese e-commerce giant JD announced an increase in the sale of dishes: the demand for baking dishes more than tripled last year's figures. And closer to the end of the quarantine, sales of lunch containers soared: people who return to work prefer to take food from home to minimize the risk of infection.

The desire to look good and stay fit provided a 4.5-fold increase in sales of hair clippers, and one and a half increase in sports equipment and yoga mats.

In the first half of February, mobile app downloads in China grew by 40% compared with the average in 2019. In just one week, from February 2 to 9, a record number of downloads through the Apple Store were recorded - more than 220 million. The most popular segments were gaming and educational applications.

80% of Internet users prefer video feeds to blogging. While demand for Netflix is ​​growing in Europe and the USA, in China live broadcasts on the Taobao platform are in high demand. Compared to the same period last year, their number more than doubled.

Due to the need to work online, the demand for programs that organize remote conferencing, such as Zoom, Hangouts Meet from Google and others, has increased.

Services that use artificial intelligence to work with large amounts of data (for example, Amazon Web Services) have grown in popularity. This is especially true when it is necessary to accelerate the development and clinical trials of drugs.

And in China, the social video platform Kuaishou, together with the Ministry of Education, has opened a nationwide cloud-based online class for quarantine at schools and universities.

How brands respond to the pandemic: humor and manipulation

Well-known brands are in no hurry to hype on the coronavirus - few people want their name to be associated with a negative. However, businesses from areas affected by global hysteria had to apply situational marketing.

Beer brand Corona has suffered due to the similarity of the name with the new virus. The results of a survey in the United States showed that 38% of people would not buy this beer under any circumstances, and another 16% were not sure what the connection between the drink and coronavirus was.

Although many expected the brand to respond to that creatively, Corona limited itself to a restrained and polite statement - they have said they sympathize with everyone who was infected, but they have nothing to do with the coronavirus. The company is optimistic and argues that beer sales remain high.

By contrast, a New Zealand bar House on Hood took advantage of the situation by posting photos of men in protective suits and respirators on social networks. In their hands they were holding Corona beer, and the signature read: "Catch some Corona at house this summer". After a violent reaction in social networks and the media, the publication was deleted. 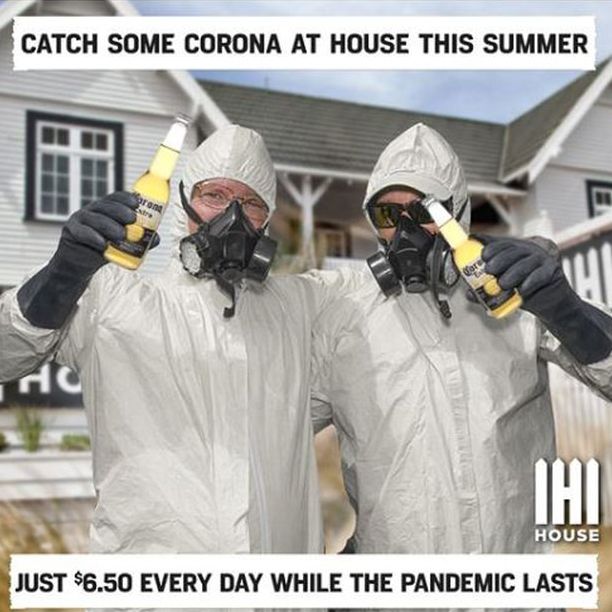 While Corona prefers to stay in the background, another American beverage maker, Avery Soda, has entered the market with the new Coronavirus Cocktail. The brand maintains a scandalous image by regularly releasing carbonated drinks based on current news: for example, “Swine Flu Tonic” and a drink dedicated to presidential candidates.

Distinctive in this story are strong drinks, which many rushed to use as disinfectants due to a lack of antiseptics. Popular American vodka producer Tito’s was forced to explain repeatedly on Twitter that the strength of the drink is not sufficient to kill viruses - vodka contains only 40% instead of the required 60.

“As soon as we saw articles and messages on social networks, we wanted to rectify the situation,” Tito’s representatives explained. - “Although it would be nice for business if our fans bought up a huge amount of vodka. But we would be ashamed to waste a good product in vain, especially if it does not disinfect. ”

At the height of the epidemic, the KFC fast-food restaurant chain launched an ad in which restaurant visitors lick their fingers. After users complained about the promotion of "irresponsible behavior" during the pandemic, the brand was forced to suspend the campaign.

Brands that produce disinfectants and medical masks are concerned not with advertising, but with the satisfaction of demand, which soared several times. Nine out of ten keywords searched at Amazon in early March are related to the coronavirus. And Purell hand antiseptic was resold on eBay for a record $ 149.

And although all social networks and trading platforms - from Facebook to eBay - have come to grips with speculation and false information about the coronavirus, sellers continue to manipulate the mood of buyers actively. The Estonian company Novads OU accompanied the announcement of the sale of masks with a message of “growing panic,” and the British seller Easy Shopping 4 Home called its respirator “anti-coronavirus”.

The fact that drugs and vaccines for the new disease do not exist yet did not prevent the Russian manufacturer Otisifarm from launching an advertising campaign of arbidol as a means of combating coronavirus.

The drug was developed in the 80s in the Soviet Union as an antiviral. Since its effectiveness was disputed in international clinical trials, arbidol was not allowed for sale in Europe and the USA. But in Russia and China, the medicine is a very popular means "for the prevention and treatment of viral diseases."

Because of the epidemic, at the beginning of the year, sales of arbidol increased sharply - videos are actively distributed on the Internet in which “experts” talk about the miraculous properties of the drug. And an advertising campaign on the Russian radio reported that arbidol "is effective even against the coronavirus." As a result, the antimonopoly service recognized the advertisement as a violation.

However, now the drug is sold on international online platforms: for example, on eBay a pack of 20 tablets costs about $ 65, while in Russian pharmacies it costs about $3.

The airlines, tour operators and hoteliers, who have found themselves in the worst situation, have no choice but to reduce prices, advertise places that have not yet been covered by a pandemic, and promote domestic tourism.

So, a travel company in Japanese Kyoto offers not to miss a chance and see the sights, while there are no crowds of people. The publications on Twitter are accompanied by the hashtags #NoPeople and #NowIsTheTime, and one of the photos with the monkey is signed:

“It has been a long time since there were more monkeys than people.”

Situational marketing is also practiced by apartment owners on Airbnb, a popular housing search resource. “Escape from the coronavirus!” “We have toilet paper!”,“47% coronavirus discount”,“Coronovirus-free Sunny panoramic room”- these are not all attractive offers for tourists.

While festivals and film premieres are being canceled around the world, entertainment-related companies can only joke about the coronavirus. Witty movie star sketches appear on YouTube thick and fast.

After postponing the premiere of Bond 25 under the title No Time to Die Daniel Craig starred in one of the episodes of Modesto's Sands, a Hollywood soap opera parody. In the video, which convinces the audience that no one was injured from the coronavirus, the actors ostentatiously do not touch each other, spray everything with an antiseptic and kiss through the film.

In times of crisis, brands are better off focusing not on sales, but on their reputation. The winners will be those who demonstrate customer care, will be flexible and forward-thinking. Here are four principles that should be adopted by the business.

The epidemic is a test of humanity for brands. Therefore, instead of the question “how to sell more”, one should ask the question “how can we support”. An example of this is the top companies from Alibaba to L’Oreal, which donated to the fight against the coronavirus.

Help is possible even for small businesses: it can be products or services, consultations or small donations. In any case, such advertising will play into the hands of the brand name.

“Brands must be sensitive and responsive in order to avoid damage to their reputation,” explains Cheuk Chiang, director general of Dentsu Aegis Network in North Asia. “Those who take a useful approach to promotion will win.”

This is especially true for companies in the hospitality industry. To maintain customer confidence and reputation:

As more and more people find themselves in forced isolation, it's time to increase their online presence. Create thematic applications, videos, games - for example, how to cook, play sports, improve your health or take care of yourself at home.

Lin Qingxuan, the Chinese cosmetics company, which had to close 40% of stores, has transferred over a hundred consultants to the WeChat online application. As a result, sales at the epicenter of the epidemic, Wuhan, doubled compared to the previous year.

Sooner or later, the pandemic will end, and it is better to start preparing for recovery now. Think through promotions, develop new products or services to stimulate sales after the crisis. For example, one of the Chinese travel agencies during the quarantine was engaged in staff development, updated internal resources and developed new products.

Be attentive and caring to everyone in such a difficult time.

Enjoy this blog? Please spread the word :)
Share with: