In this article, we'll look at the Git branch model called git flow. The model was proposed by Vincent Driessen in his article “A successful Git branching model” and is used in various variations. The Git flow defines a strict branching model designed around the project release. This provides a robust framework for managing larger projects. The general scheme of the model is as follows:

We want to make your Git develop process easier and so we’re excited to announce new support for your team’s branching workflow. 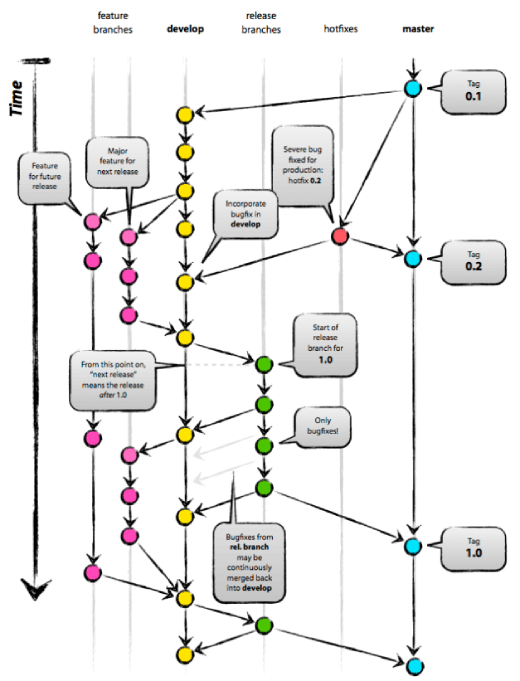 Instead of a single master branch, this workflow uses two branches to record the history of the project. The master branch stores the official release history, and the develop branch serves as an integration branch for features. It's also convenient to tag all commits in the master branch with a version number.

1. Open terminal or command prompt and go to your project directory (It must be initialized with git).
2. Run git flow init
It will ask some questions about the different branches’ naming structure. Please write answers like below.

Let us dwell on the names of branches. 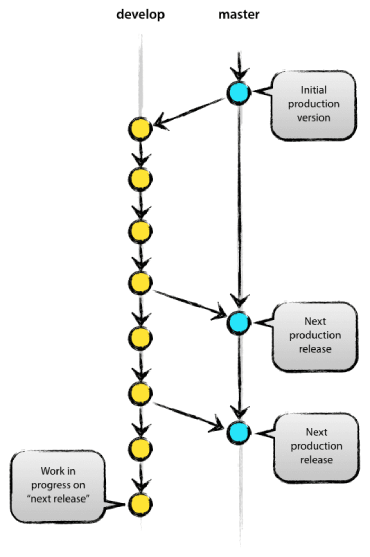 At the core, the develop model is greatly inspired by existing models out there. The central repo holds two main branches with an infinite lifetime:

Next to the main branches master and develop, our develop model uses a variety of supporting branches to aid parallel develop between team members, ease tracking of features, prepare for production releases and to assist in quickly fixing live production problems. Unlike the main branches, these branches always have a limited lifetime, since they will be removed eventually.

The different types of branches we may use are:

Each of these branches has a specific purpose and are bound to strict rules as to which branches may be their originating branch and which branches must be their merge targets. We will walk through them in a minute.
By no means are these branches “special” from a technical perspective. The branch types are categorized by how we use them. They are of course plain old Git branches.

anything except master, develop, release-*, or hotfix-*

Feature branches (or sometimes called topic branches) are used to develop new features for the upcoming or a distant future release. When starting a develop of a feature, the target release in which this feature will be incorporated may well be unknown at that point. The essence of a feature branch is that it exists as long as the feature is in develop, but will eventually be merged back into develop (to definitely add the new feature to the upcoming release) or discarded (in case of a disappointing experiment).
Feature branches typically exist in developer repos only, not in origin.

When starting work on a new feature, branch off from the develop branch.

Incorporating a finished feature on develop

Finished features may be merged into the develop branch to definitely add them to the upcoming release:

The --no-ff flag causes the merge to always create a new commit object, even if the merge could be performed with a fast-forward. This avoids losing information about the historical existence of a feature branch and groups together all commits that together added the feature. Compare: 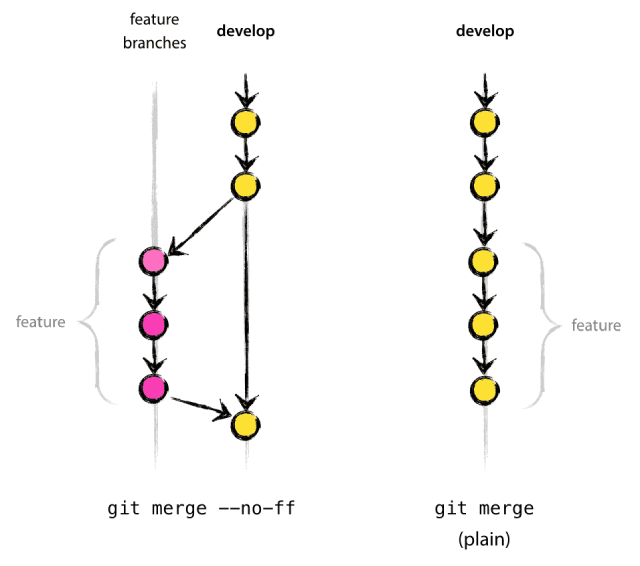 In the latter case, it is impossible to see from the Git history which of the commit objects together have implemented a feature—you would have to manually read all the log messages. Reverting a whole feature (i.e. a group of commits), is a true headache in the latter situation, whereas it is easily done if the --no-ff flag was used.
Yes, it will create a few more (empty) commit objects, but the gain is much bigger than the cost.

Release branches support the preparation of a new production release. They allow for last-minute dotting of i’s and crossing t’s. Furthermore, they allow for minor bug fixes and preparing meta-data for a release (version number, build dates, etc.). By doing all of this work on a release branch, the develop branch is cleared to receive features for the next big release.

Release branches are created from the develop branch. For example, say version 1.1.5 is the current production release and we have a big release coming up. The state of develop is ready for the “next release” and we have decided that this will become version 1.2 (rather than 1.1.6 or 2.0). So we branch off and give the release branch a name reflecting the new version number:

Switched to a new branch "release-1.2"

After creating a new branch and switching to it, we bump the version number. Here, bump-version.sh is a fictional shell script that changes some files in the working copy to reflect the new version. (This can, of course, be a manual change—the point being that some files change.) Then, the bumped version number is committed.
This new branch may exist there for a while, until the release may be rolled out definitely. During that time, bug fixes may be applied in this branch (rather than on the develop branch). Adding large new features here is strictly prohibited. They must be merged into develop, and therefore, wait for the next big release.

The first two steps in Git:

The release is now done and tagged for future reference.

Edit: You might as well want to use the -s or -u "key" flags to sign your tag cryptographically.

To keep the changes made in the release branch, we need to merge those back into develop, though. In Git:

This step may well lead to a merge conflict (probably even, since we have changed the version number). If so, fix it and commit.

Now we are really done and the release branch may be removed since we don’t need it anymore: 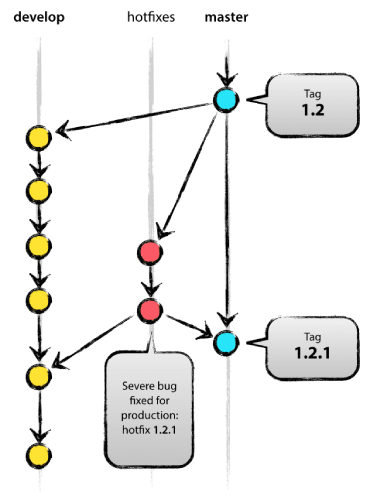 The essence is that the work of team members (on the develop branch) can continue, while another person is preparing a quick production fix.

Hotfix branches are created from the master branch. For example, say version 1.2 is the current production release running live and causing troubles due to a severe bug. But changes on develop are yet unstable. We may then branch off a hotfix branch and start fixing the problem:

Don’t forget to bump the version number after branching off!

Then, fix the bug and commit the fix in one or more separate commits.

Edit: You might as well want to use the -s or -u

Next, include the bugfix in develop, too:

Ignored files are usually built artifacts and machine-generated files that can be derived from your repository source or should otherwise not be committed. Some common examples are:

Ignored files are tracked in a special file named .gitignore that is checked in at the root of your repository. There is no explicit git ignore command: instead, the .gitignore file must be edited and committed by hand when you have new files that you wish to ignore. .gitignore files contain patterns that are matched against file names in your repository to determine whether or not they should be ignored.

In addition to these characters, you can use # to include comments in your .gitignore file:

You can use \ to escape .gitignore pattern characters if you have files or directories containing them:

Your local code bases should always be relevant at the time of creating the merge or development branch, as well as creating a pull request for the admin